I will do my best not to turn this into a full out rant on Greg Davis and the completely inept offense. But let me make this perfectly clear, this loss lands solely on the shoulders of the offense. The defense played a hell of a game. They forced 4 turnovers, held Iowa State to 9 points, came up time and time again with their backs against the wall to give the offense a chance...only to have the offense let them down. To their credit, they didn't give up. They kept fight until the end, even though they probably knew the offense wasn't going to come through.

Contain Steele Jantz - For the most part, good job defense. Jantz had only 40 total rushing yards and only picked up one third down with his feet and was stuffed for no-gain or a loss on a couple of others. And though the D didn't come up with a sack, they had 8 TFLs and pressured Jantz into a couple of bad throws.

Vertical Offense - Well, at least they tried...some. Vandenberg took a couple of shots down the field and was mostly unsuccessful. He had 2 picked off, both in hurry-up mode and both trying to be overly aggressive when conservatism might have been the right decision. He was never in-sync with Kevonte Martin-Manley and overthrew a probable TD.

The mid-range pass was a little more present. The best play Iowa ran all day was the classic Ken O'Keefe play-action bootleg where all the receivers flood one side of the field at multiple levels. Of course Vandenberg never threw it to the deepest level, but was at least not throwing it to the guy in the flat.

What was very frustrating though, was the way Iowa failed to attack ISU's cornerbacks when they were in obvious man coverage. In past years, it was almost an automatic check at the line to throw a fade over the man coverage. How many times did we see that last year with Marvin McNutt? Well it was absent Saturday as Iowa State consistently loaded the box and player cover 1 with the receivers out wide in single coverage.

And you can't blame the pass protection this week. It was fantastic. Vandenberg had all day to sit in the pocket to try to find someone open. Iowa didn't give up a sack, and Vandenberg was only even pressured a couple of time.

Not too many big changes towards the top. I shuffled a few teams around just based on how I was feeling this week.

The big jump up this week is from Kansas State as they destroyed Miami. Virginia Tech also got a big bump as I probably had them too low last week. TCU joins the ballot...I left them off week 1 because they didn't play. Texas, Mississippi State, Oregon State, Arizona State, and Tennessee also join the fun. A couple of those are rewards for nice wins over the weekend and a couple are just because there aren't a lot of teams with top 25 type resumes yet.

All the teams that dropped out were losers on Saturday.

Hats off to the defense. They played a hell of a game.

Here it is folks, the brand new Cy-Hawk Trophy. 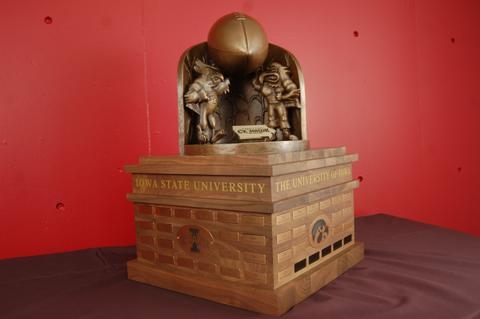 It's a nice looking trophy (a little cartoonish for my taste) and most definitely a football trophy. It is certainly better than the old one, the corn family one, and the replacement that fell apart in Ames last year. And it would sure look nice in Iowa's empty trophy case.

So hate week. This is going to be my first Iowa-Iowa State game attended in person. I'm not sure how I've never been before...maybe I'm just too cheap, but I'm excited to finally experience this game live.

Thanks Captain Obvious, right? It's pretty much the same thing every week with Iowa's defense against a mobile quarterback. The defense struggled early against Northern Illinois to contain Jordan Lynch as he ran draw after draw on third downs.

But the defense adjusted and improved. In the second half, besides the 73-yard touchdown, NIU had -5 yards of offense. The defensive ends were a big part of this. Joe Gaglione had 3 TFLs, a sack, and a forced fumbled. And Dom Alvis added 2 TFLs and a sack.

So there are some reasons to be hopeful.

But last year, Jantz ran wild against the Hawks. He looked like a Heisman candidate passing for long third down conversions, running for others. He often extended plays with his feet and found receivers down-field after the coverage had broken

I had the ISU game turned on, but was glued to the Iowa game on Saturday, so didn't see much of Jantz. But from all reports, he had a very good game. He complete over 70% of his passes and averaged 6.2 yards per attempt (basically double of what Vandenberg averaged). He threw 2 touchdowns, but still had an interception (he had 11 last year before he was benched).

So the key here is to make Jantz uncomfortable and keep him in the pocket. Under pressure, he makes bad decisions that Iowa's secondary is good enough to take advantage of. And ISU's offensive line is not an impenetrable force. They gave up 4 sacks to Tulsa and as a result, Jantz finished with -9 rushing yards.

I don't even think I need to say anything about this. Iowa has to, HAS to, have some vertical element to its offense. It's not just the fact that the horizontal offense struggled mightily in the redzone and the passing game looked all around awful. Teams are going to figure out very quickly that all they need to do it load the box against the run and defend the short passing game. Also, blitz.

Iowa needs to get its pass protection figured out quickly. ISU gave up 4 sacks, but Iowa gave up 6 in week one (which is tied for last in the country). Part of the reason there was an absolute absence of a vertical passing game, was that Vandenberg just didn't have time to sit in the pocket and let plays develop. Even when he did had time, he had already been hit so many times, he got jittery, lost his footwork, and made poor decisions. As Kirk Ferentz said on Tuesday, the good news is that these are all correctable thing. And if last season was any indication, Vandenberg should look a lot more comfortable playing in Kinnick Stadium than on the road.

Maybe Greg Davis is a sly old dog and was just setting us all up with his horizontal game to pull out a ferocious vertical attack to be unleashed this week. I have my fingers crossed.