Welcome to Fight For Iowa, a blog dedicated to Iowa Hawkeyes Football. You may have stumbled upon this site looking for the University of Iowa's "Fight For Iowa" campaign. No worries. You can check that out at fightforiowa.hawkeyesports.com.

Until the game is won: Part 2

My bye week Saturday was probably a lot like other Iowa fans. I spent time with the family, let my wife go out while I watched the kids, and watched a whole lot of football.

But there was also something else that was brewing during the bye week. I was offered the opportunity to join the tremendous Iowa blogging team at Black Heart Gold Pants. I graciously accepted and if you follow BHGP closely you've probably already seen a couple of my posts over there. Just today I posted my usual Four Factor Friday post for the Michigan State game tomorrow.

I plan on keeping this site maintained for the time being. I know a lot of people use it to check the schedule, so I'll do my best to keep that up to date. I also plan to use the site to share things that aren't worthy of a 500-word write up on BHGP, but are a little more substantial than what I'd put in a tweet.

So thanks to everyone who's followed me on here and be sure to continue following me over on Black Hear Gold Pants. I'm sure it'll be lots of fun.

So maybe Greg Davis does know what he's doing

I've been hard on Greg Davis. The offense has struggled under his control and has lacked an identity. The emergence of Mark Weisman has masked a lot of the problems and has everyone feeling a lot better. But there is still a lot left to be desired.

However, I do really like Greg Davis as a speaker. Kirk Ferentz has let the coordinators talk a little bit more this year and every time Davis gives good insight into what the Iowa offense is trying to do. He's more open about schemes, terminology, etc... And you can really tell he is a coach that loves to teach the game. He talks to reporters like students. So I like that. And I'm starting to think, maybe, just maybe, he knows what he's doing.

Yesterday Phil Parker and Greg Davis held short press conferences in lieu of the typical game week Ferentz presser. Here's the full transcript[pdf] if you care to read it. Marc Morehouse has some videos if that's more your thing.

One comment by Davis really stuck out to me when asked about how he'll use Damon Bullock and Mark Weisman.

For example, if we can put what appears to be a base formation, two backs, a tight end, two wide receivers on the field, with Mark being the fullback, Damon being the tailback, and then the next play the same grouping is out there, perhaps Damon is a wide receiver, using the personnel to best fit the situation is something we're going to have to do.

Pic for Iowa: Weisman for Heisman

I'm not sure who to credit for this perfectly timed photo of Mark Weisman, but H/T to @PlannedSickDays for posting it on Twitter. 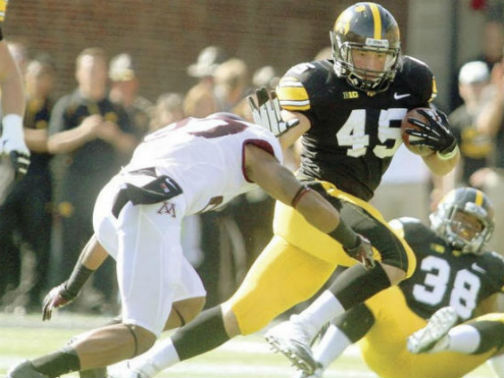 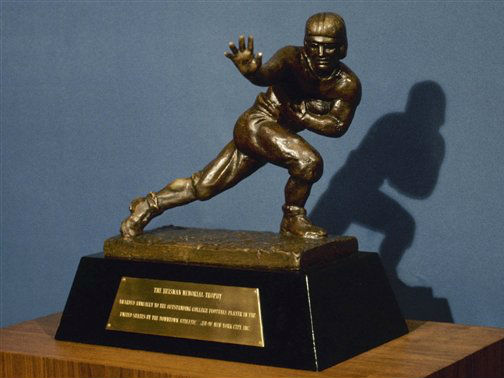 Hover over the picture for full effect.

The difference a week makes

My brother texted me at halftime and said that Iowa looked like a completely different team than last week. So very true. How Iowa can go out one week and lose to a bottom half MAC team, then come back and beat an undefeated (though not really that good) Minnesota, I'll never know. I suspect it has a lot to do with Kirk Ferentz.

The team was ready to play on Saturday and came out fast and furious. The offense pounded the ball with Weisman and even used a little trickery. The defense was stifling and forced the inexperience Max Shortell into a lot of mistakes. The game was over by half and now Iowa goes into the off week with a "W" and a pig.

Get early pressure - Really the team didn't make any major changes from last week. It was one minor change that made all the difference: the defensive line played a lot better.

You don't really see it show up on the stat sheet from the D-linemen, but they were very disruptive and really allowed the back 7 to make plays. The pressure they were able to put on Shortell forced him into a lot of mistakes. As a result, Iowa had 3 interceptions including one on Minnesota's opening drive and one by Kirksey that he return for a TD.

The D-line pressure also allowed the linebackers to get free shots on the running backs or on Shortell. Hitchens and Morris both finished with double-digit tackles and each had a sack.

Keep doing what works - It looked like Iowa had game planned for Minnesota's stout defensive line and was worried that Vandenberg would be under a lot of pressure. The passing attack was back to the more horizontal offense stuff we saw the first two weeks of the season. And it was frustrating at time. There was a 3rd-and-long that Iowa read blitz (and it wasn't a blitz) where Vandenberg threw a quick pass to the sideline that went for negative yards.